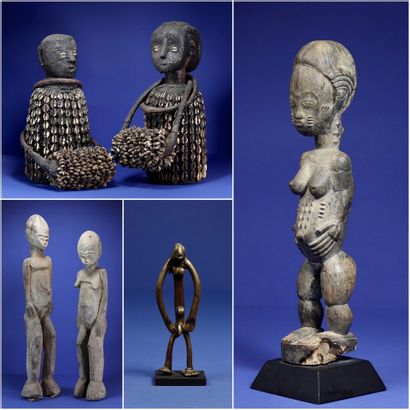 for study by appointment

Emmanuel Bordier has had an international professional career in the field of construction and urban planning, mainly in West Africa where he lived with his family for many years. Wanting to escape the arid contingencies of the profession, he became interested in local cultures and more particularly in traditional arts in the 1970s. Statuary, masks and other cultural material of the different ethnic groups were his major interests.

He was able to acquire original works of art, which often deviated from the classical aesthetic conventions, on the spot and in Europe. The paths he took led him to objects ranging from the simplest to the most complex, where only quality mattered.

The selection of objects offered here today shows a very personal itinerary, a sensitive testimony and as Emmanuel Bordier says: "an intimate breath on a marvellous cultural world, a spirituality which refers to the mysterious foundations of the human soul".

Max Lanci is a visual artist (drawing, sculpture, installation) who has been collecting African art for several decades. He acquired his first piece in 1977 when he was a young student. He built his atypical professional career around multiple activities: communication and strategy consulting, and of course artistic creation, through his work as an artist, but also the creation of magazines, the organization of concerts, exhibitions, and the restoration of heritage. During all this time, African art has never ceased to feed him.

About the set of Fon objects presented here, Max Lanci says: "they have constituted a resource in the same way as the Florentine Renaissance, the Arte Povera and the duchampian bric-a-brac: discovering and capturing little by little the snippets of a universe that seems closed in on itself, but whose stakes and modalities reveal the same deep humanity.

Collecting allows us to be accompanied by stimulating and fertile presences.

The work of creation finds there its account of interrogations and new possibilities, in terms of materials, on the formal level, in the gesture and the intuitions.

In the places of their genesis as well as among experienced collectors, voodoo objects from the Togo-Benin area occupy a singular place within African art, arousing clear-cut reactions: from epidermal aversion to possessive fascination.

Probably because, under appearances that seem to vary infinitely, they show themselves to be as rude as the reasons for their production are prevalent.

Each one of them conveys questions and attempts to answer them, worries accompanied by possible remedies. Each of them is a sign of the desire to live.