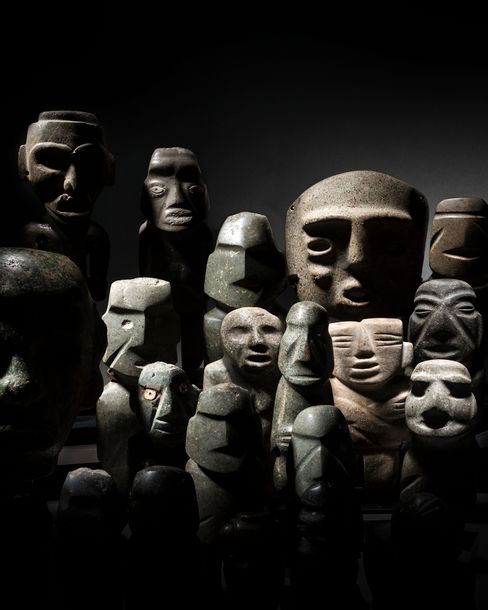 As often happened in the Meso-Amerindian world’s long history, when the late Pre-Classic Era succeeded the dazzling Olmec culture, it continued seamlessly from the previous civilization, building on its innovations. Independent principalities prospered on the Gulf of Mexico coast and in the Oaxaca Valley, the Puebla Basin, western Mexico—and Guerrero: an area between Mexico City and Acapulco that was, and still is, one of the country’s most hostile and barren places. Furrowed by often-dry rios, it is where craftsmen got their raw material. Masks, axes and figures have been found in its caves. In the beginning, precisely, was the ax. This tool inspired a ceremonial version, whose shape then evolved into a stylized, frontal, geometric, spare statuary without the trademark lack of individuality and expressiveness of the previous culture’s artifacts. Pre-Teotihuacán culture developed on these foundations in the area between 300 and 100 BCE.
Before Teotihuacán
These standing, upright, proud-looking figures have faces that are never quite all the same nor ever quite different. They laid the foundations of what evolved into the brilliant Teotihuacán civilization, and inklings of the canons of this art blessed by the gods can be found here. The figures are small yet give the impression of being monumental in size, their arms and open palms outstretched in a gesture of offering. They were a first step towards realism, although hieratic poses still predominate. No temples were built in Guerrero and the works found are far from revealing all of this culture’s secrets—the mystery surrounding them undeniably adds to their appeal. In January 1992 Jacques Blazy, the auction’s expert, held the first show devoted to these pure-lined works, "Stone Figures: Guerrero Art in Pre-Colombian Mexico", at the Seita Museum-Gallery, a pioneering institution. This piece was acquired in the late 1960s at New York’s Merrin Gallery, a reference in Pre-Colombian art. It comes from a French private collection, one of the world’s most important for Guerrero cultures. Both of these factors, in addition to the work’s stylistic qualities, mean it can serenely await the verdict of the bidding.

With your consent, we would like to use cookies placed by us on this site. Some of these cookies are strictly necessary for the smooth running of the site. Others are used to:

Your consent to the installation of non-strictly necessary cookies is free and can be withdrawn or given at any time.

By allowing these cookies, you agree to the deposit, reading and use of tracking technologies necessary for their proper functioning.
Read more about our privacy policy.